Why did you choose Re:Humanism? Anything in particular that attracted you to the contest?

Our team (Albert Barqué-Duran, Mario Klingemann and Marc Marzenit) believes that any initiative fostering projects in between art, science and technology is worth everyone’s attention. The specific call for Re:Humanism was really pointing at the very central discussion of our project “My Artififical Muse”. We thought it was an opportunity we could not miss. It would have been a mistake not applying for it! And we are very grateful for that.

In the exhibited work a human artist paints an artwork fully designed by an artificial neural network. However, it is also true that the artificial intelligence that designed the artwork is the product of a human mind. Who do you think is, thus, the author of such an artwork?

For the artist community focused in working with Art and Artificial Intelligence (AI) this is a question that we keep receiving. For the time being, we understand our artistic processes as a collaboration between us and an AI (or some other computational methods of the sorts). We are also the ones behind the bunch of algorithms; and it is in this interaction when the interesting creative collisions emerge. In the specific case of “My Artificial Muse” we understand it as a human-machine curation process of the piece. In general, we always try to be very clear about what our algorithms are capable of and try to lower the “hype” and the false beliefs that have been created in this artistic area.

Besides the visual performance, you implemented music too in your work. Can you deepen the role that music has in My Artificial Muse?

Music is an element that gives context to the piece. It is a tool to immerse ourselves in the development of the narrative. The soundtrack is created from several parameters. According to the chromatic range of the painting, a specific style and musical scale are determined, conditioning what the piece will sound like.
Additionally, the sound created is generated thanks to movement sensors embodied in the artist during the performance. These sensors capture all their movements while developing the pictorial interpretation. This makes each performance a unique musical piece.

The concept of the muse, the inspirational drive behind the source of one’s art, is key to your work. How do you think the aesthetic canons will change in the next 10 to 20 years?

We believe that aesthetic canons are constantly evolving. From the moment we premiered “My Artificial Muse” (around 3-4 years ago) to today, the perceptions and preferences from people in relation to generative art or AI art have already changed significantly. What we think it is also interesting is the fact that not only the preferences and beliefs have changed but the aesthetics achieved from these algorithms have evolved too. We can see clear aesthetic patterns in the different types and classes of computational processes, algorithms used, or technology implemented. A similar idea to the different “artistic movements” in art history but in a very short period of time.

Albert Barqué-Duran is a Honorary Research Fellow In Cognitive Science and a new media artist at City, University of London and Lacuna Lab in Berlin. He leads disruptive projects at the intersection of art, research and technology with the aim of finding novel formats of generating scientific knowledge to reflect about contemporary and futuristic issues and its cultural implications. He has exhibited and performed at Sónar+D (Barcelona, Spain), Creative Reactions (London, UK), Cambridge Neuroscience Society (Cambridge, UK), Max Planck (Berlin, Germany), SciArt Center (New York, USA), IGNITE Fest (Medellìn, Colombia).

Mario Klingemann is an artist who works with algorithms and data. He investigates the possibilities that machine learning and artificial intelligence offer by understanding how creativity, culture and their perception work. An important part of this investigation is his work with digital cultural archives like the British Library, the internet Archives or the collection of Google Arts & Culture where is currently artist in residence. He is a regular speaker at international conferences about art, design and media, winner of the 2015 Creative Award of the British Library, and his works have been at the Ars Electronica Festival, the Centre Pompidou, Paris, the MET and the MoMa, New York.

Marc Marzenit is an audio engineer, composer, music producer and DJ with many years of experience touring the world. He performed in places like London, Paris, New York, Los Angeles, Argentina, Mexico, Canada or Asia, just to name a few. Besides his profile as underground musician, he also created shows like “Suite on Clouds”, a 3D mapping show with 8 violinists, 1 harp, symphonic percussions, synthesizers and a grand piano. These projects draw on his classical background and show his integrated vision of electronic music: combining acoustic, analogue and digital instruments together in the same show. 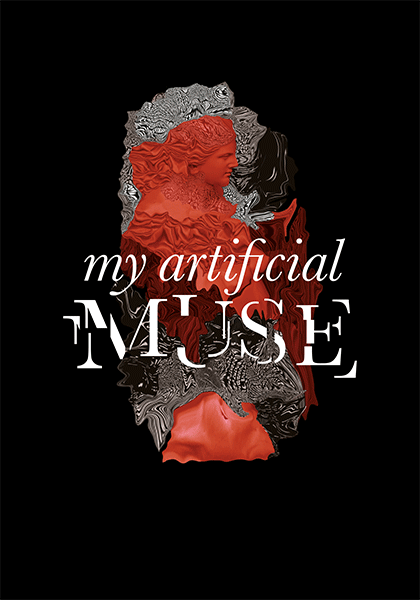 Description of the work

“My Artificial Muse” is a performance in IV acts exploring how Artificial Intelligence can collaborate with humans in the creative and artistic processes.The human artist Albert Barqué-Duran performs a live-painting show, reproducing an artwork 100% designed by an Artificial Neural Network conceived by Mario Klingemann. Also, the artifi-cial intelligent machine performs a visual show on how it generates new paintings and showcases the computational creativity processes behind it. A generative experimental music set, produced by Marc Marzenit, is played through a series of embodied sensors that follow the movements of the artist during the performance. (Playtime: 60 minutes aprox.). Each performance is unique.