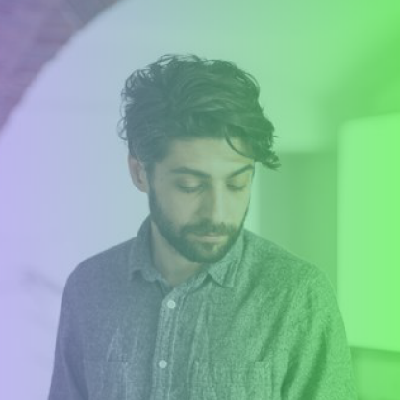 Why did you decide to participate in Re-Humanism?

I saw the call for proposals while I was starting to develop the project. It was a perfect opportunity to create a beta version of the software and play around with making a prototype image before continuing to work on the larger body of work.

In your artwork you put forward the difference between the “apolitical” view of raw data which a machine simply collects and organises and the “political” view – or, better, perception – that humans have of the artifacts you chose. Can you deepen the nature of this contrast you showed us with your work?

Yes, I feel this is a tension that is important to note, especially as technology (and machine-learning techniques in specific) becomes a larger and more integrated part of our everyday lives. From a computational point of view, any analysis of an image is “flattened” to a level of data – the content and contexts of the image is lost in this translation, with the possible exception of very basic human-tagged metadata (which, in it of itself, is also treated by the computer as “raw data”). So while a machine-learning algorithm, with the appropriate feedback and reinforcement, appears to exhibit the signs of context-based learning (for instance, it can tell the visual difference between a dog and a cat), its understanding of the concepts (such as “dog” and “cat”) is limited. The algorithm lacks the capacity to self-reflect on its analysis and deepen it, it can only improve in the efficiency of its technical implementation. For it to “change its mind”, it must be re-programmed or re-trained for this purpose by a human being. It exhibits intelligence but it is not aware of the impact its decisions have in the world.

The problem here is not the technology, but in the way we as a society privilege apolitical data-oriented approaches as objective and authoritative. The notion of objectivity, of the algorithm as mathematical and precise as opposed to the fallibility and bias of human emotions, is dangerous because while data itself is incapable of conscious bias, it does not mean it does not carry a bias; recent observations of racial bias in facial recognition software is a case in point. And as Franco “Bifo” Berardi notes in a recent essay, such forms of functionally-oriented automatized intelligence – lacking in the human quality of “sensibility”, whether aesthetic or ethic – may already be leading the way towards techno-totalitarianism.
The tension between raw data and cultural meaning-making is embodied in the very process of image-making in this project. On the one hand, data-oriented techniques such as machine learning image-analysis tools and aleatoric recomposition algorithms are used as tool to produced variations whose direction and complexity can exceed my artistic imagination. On the other hand, I am making a variety of politically-aware, contextual, and aesthetic decisions to complement, reflect, and challenge these quantitative techniques. The images are created through an iterative process of navigating between these two polarities.
“A Brief History of Western Cultural Production”. The main detail arousing from the title is the geographical frame: what do you intend as the “West” and why did you choose to stress this particular concept in the creation of your artwork?

The emphasis here is geographic but also conceptual, referring to a Western way of thinking about knowledge, technology, history, and progress, and how these concepts intertwine to reinforce once another in a larger cultural narrative.
Prominent museums, including the ones whose databases are used in this project, have a complicated history with their collections. On the one hand, they preserve a history of human production, from ancient artifacts to contemporary artworks. On the other hand, many of the items in their collection – and this is especially true of historical artifacts – are compromised in terms of provenance and ownership: they may have been taken without permission from other cultures, or are not returned to cultural institutions who request their return (the Elgin Marbles controversy had just begun as I was conceptualizing the project). Furthermore, these cultural artifacts are presented and historicized through a Western perspective, with indigenous items de- and re-contextualized into a narrative of Western values which nonetheless appeals to claims of universalism. So in effect, even when the artifact is not Western, it is presented within a Western linear narrative of cultural production.

So in a sense, International Gold Standard 001 is an exercise in subjecting Western European artifacts to the same process of re-contextualization. There is an irony in that this re-contextualization occurs using the conceptual pillars of Western thought: by using technology to indiscriminately collect cherished artifacts which the museum provides freely online as a gesture of open-access or “knowledge democratization”, and subsequently transform them without any particular regard to the specificity of their origins. The idea of creating a pan-European coin, monetary technology which advertise the image of a ruler’s face, in this way seemed poignant given the current politics of the EU.

You said that this is a part of a larger series of artworks you will work on in the future. Have you taken any further steps in this project? Any new development you would like to talk to us about?

The software created for this project has been developed further and is used to generate ongoing series of images based on different thematics. The first completed body of work with this approach is a recent collection of works titled Landscape Past Future, which investigates the ideologies and techniques of landscape paintings and photography. In the series, and similar to the International Gold Standard 001, aggregate images are created by applying metadata-sorting and ML techniques to the collections of major cultural institutions, and the custom “mosaicing” of the results to new artworks. However, the concept of the landscape, or human representation of natural environments in an era of environmental collapse, is the overarching thematic. Several months after the exhibition of prints, thousands of aggregate images created during the months leading up to the exhibition were then used as training dataset for a GAN algorithm to produce a video work Machine Learned Landscape, in an attempt to investigate what kind of understanding of landscapes can be achieved by having an algorithm iteratively learn from its own output.

Adam Basanta’s work explores technological practices as active, participatory, multi-sensory performances which are distributed throughout a variety of human, cultural, material and computational agencies.Born in Tel-Aviv (ISR) and raised in Vancouver (BC), Basanta has lived and worked in Montreal since 2010. Originally studying contemporary music composition, he has developed an artistic practice in mixed-media installations.Since 2015, his works have been exhibited in galleries and institutions including Fotomuseum Winterthur (CH), Arsenal Art Contemporain (CAN), Galerie Charlot (FRA), National Art Centre Tokyo (JPN), V Moscow Biennale for Young Art (RUS), Carroll/Fletcher Gallery (UK), American Medium Gallery (NYC), Serralves Museum (POR), Edith-Russ-Haus fur Mediakunst (GER), York Art Gallery (UK), and The Center for Contemporary Arts Santa Fe (USA).He has been awarded several international prizes, including the Japan Media Arts Prize (2016) and the Aesthetica Art Prize (2017). In 2018 he was longlisted for the Sobey Art Award. He is currently represented by Ellephant Gallery (Montreal, CAN).Remaining active as an experimental composer and performer, his concert music, live performances, and sound recordings are presented worldwide. 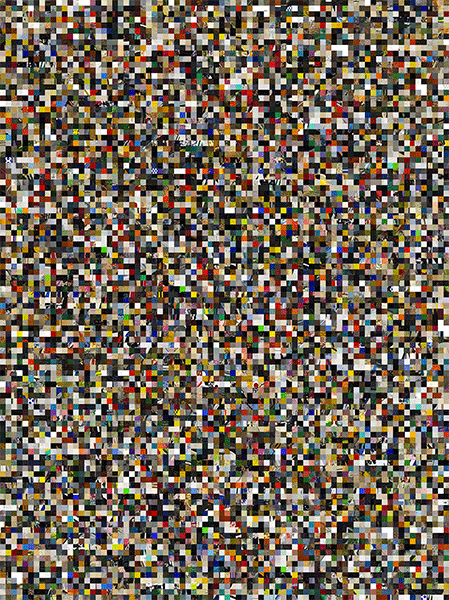 I intend to use the custom software (currently in development) to create a first study piece, which will, figure as part of a larger future series of artworks using the techniques outlined. The particular digital database subset I will employ will be sourced from The Metropolitan Museum; specifically, archeological artifacts from antiquity from around the world (Egypt, Africa, North America, South America, Europe, Asia collections). Using digital images of the objects in these collections in combination with the techniques described, the software will be used to create a artwork which will be a concatenation of available data. The work will be then be physically produced as a C-print mounted on Aluminum, sized 52cm x 76cm.In making this new artwork I will be essentially be re-extracting and re-contextualizing objects that have been previously extracted and decontextualized, thereby generating a new “universal archaeological artifact.” Inherent in this practice is a tension between an apolitical idea of “raw data” which machine-learning softwares operates on, and the deeply human, political context of the collection practices of Western cultural institutions. In operating in this space of tension, A Brief History of Western Cultural Production is designed to provoke a deepened engagement with cultural databases while exploring how their underlying structures and logic may be re-directed towards different ends